on December 13, 2017
Once in a blue moon, hubby gets to take advantage of my blogger perks. He just about fell out of his chair when I told him we had a press preview for The Last Jedi. As you can see from his smile below, Episode VIII was great!

I was scared to watch this movie. I have a serious love for Star Wars. One of my earliest memories is of entering a dark movie theater with my dad and seeing the Death Star moving on the screen. As a kid, I would watch the movies over and over. I remember watching the Ewok adventure and the Star Wars Holiday special. I read the novels, collected the comic books, and who as a kid didn't try to move something with the force. (I confess I still do at times) 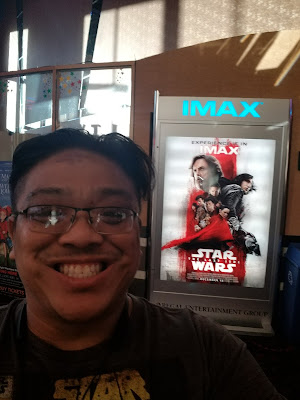 I thought nothing could match the original trilogy theatrically. The prequels were just 'ok'. I thought how could they mess it up. (They did) The Clone War and Rebel series had their moments and great character arcs. Rogue One was the closest to what I wanted as a Star Wars fan. The sacrifice and desperation those characters went through were what reminded me what made Star Wars great. Hope in the face of certain death.

But then there's The Force Awakens. Sure it wasn't the prequels, and it was passable as a Star Wars movie. I love Rey, Finn, and Poe as the new leads. But, JJ Abrams to me cribbed A New Hope because Starkiller base was just a bigger Death Star.

The trailers for The Last Jedi didn't make me feel better either. New AT-ATs (AT-M6s) advancing on the Resistance base? Luke training Rey? Rey facing Kylo Ren in a lightsaber battle? all seeming to be callbacks to Empire Strikes Back.

I was extremely and pleasantly surprised. This is hard to write without including spoilers. Sure, I had to arrest my disbelief at some parts. But Star Wars is science fantasy, not science fiction. It had the right tone and balance. It expanded the mythos of the Force and the Jedi. The best part is director Rian Johnson gave the main characters more dimension. The desperation, the sacrifice, and hope. It's all there.  There was a feeling of what was at stake as well beginning to end. Even the jokes were the right tone.

Were there flaws? Sure, no movie is perfect. There is a part that was too much of an homage to Leia's character, played posthumously by Carrie Fisher. One could question decisions made by the First Order leadership. but nothing that will pull the viewer out like the Rathars did for me in The Force Awakens.

Of course, I would recommend watching The Last Jedi. What makes it different is I believe The Last Jedi is the best Star Wars movie yet. The characters were better fleshed out and developed. The storyline is intriguing. The force is strong with this one.

Star Wars The Last Jedi hits theaters December 15, 2017.  I'll see you there! Yes, I already have my tickets for my 2nd and 3rd viewing! 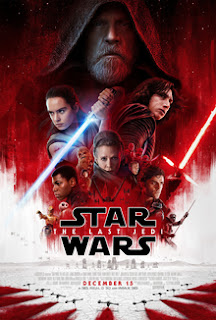 Disclaimer: Garcia Memories received free passes to view and comment on the movie.