on March 15, 2015
Date nights with hubby are few and far between now-a-days. With all the kids activities, work commitments, and family events, it's hard to find time for some fun!

This past weekend, hubby and I braved the St. Patrick's Day crowds in downtown to have a night out. We had dinner at Zymology 21 to redeem of Instagram Valetines Day competition winnings of a complimentary dinner for two! Yay!

We then went to check out the San Diego REPertory Theatre's most recent production,“Oedipus El Rey” by Luis Alfaro, which premiered this weekend. 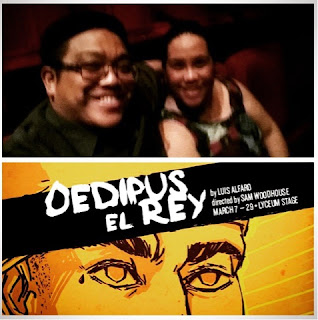 In 430 B.C., the Greek playwright Sophocles wrote one of the greatest tragedies in the history of the Western world: “Oedipus Rex,” the tale of a king who from birth was destined to murder his father and marry his mother. 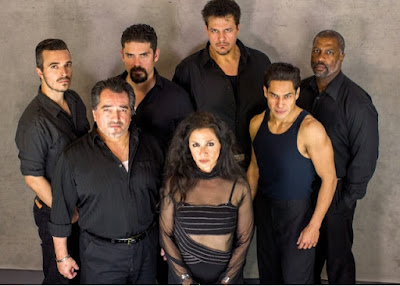 In this contemporary adaptation, Oedipus is an ex-con ready to burst free of his confinement and make a name for himself on the streets of LA: "Is our young homeboy doomed to live out his destiny as described in a tragic prophecy, or does he have the power to transcend his fate and define his own future?" With a sly sense of humor and a fiery imagination, Alfaro melds the ancient with the modern, creating a fusion of Greek mysticism, Mexican ritual and So Cal urban culture. I would have loved to have had this screen play to use when I used to teach "Oedipus Rex" in my high school English classes, my students would've loved it!


The press release I received before the play did warn: “Oedipus El Rey” contains adult themes, violence, language and nudity. The story of Oedipus with a contemporary Latino twist already had us curious, but I have to admit I wasn't really prepared for the completely nude, few minutes long, sex scene between Oedipus and his mother. Third row seats during that scene was "aca-awkward"! It did, though, add an intensity to the relationship between the two for the remainder of the play.

Prices: Tickets start at $31 to $75 / Students $18  Tickets are available for purchase online at www.sdrep.org. Four hours free parking in the Horton Plaza Garage with validation at the theatre.


Thank you to Scatena Daniels Communications for our complimentary tickets to attend "Oedipus El Rey". All opinions expressed are mine.