This year I had passes for Thursday, Friday, and Sunday. Since I didn't get a Saturday pass, I took that opportunity to roam outside the convention center and even attend an exclusive party. More on that later!

On Wednesday, my posse and I went ahead and picked up our sdcc badges at the Town and Country Hotel. This saved time instead of having to pick up badges at the convention center Thursday morning. As we headed to the hotel, we noticed the first swag of the event, which was the ever popular Warner Brothers oversized bag. There were 13 different versions ranging from TVs Vampire Diaries to the new Mike Tyson's animated series and I ended up with a Teen Titans bag. Included with the bag were the souvenir book and events guide.

As preview night was in effect at the convention center, we headed over to the Gaslamp to see all the hoopla and last minute details being put up. Promotion and walk through experiences included the Assassin's Creed Obstacle Course, NBC's Constazzntine, and the throne from Game of Thrones at the Omni Hotel Gallery. High rise wall mounts of ABC's Once Upon a Time, Vikings, and the Flash were also on display. Even promotional items for Sharknado 2 and USA network's Dig were distributed.

As people came and went from the convention center's Preview Night, hordes of Mattel products seemed to be the hot item. No doubt these toys would be made profitable on eBay.

On Thursday, since Ballroom 20 (a large venue for TV and movie promotions, and typically a long line) was not packed, I decided to hit Fox's 24 panel featuring Kiefer Sutherland. Kiefer discussed his work on the latest season and fans were appreciative. I even saw him on the exhibit floor, he was three feet away from me!

Next, I roamed the exhibit hall. I grabbed some swag (comic books, posters, pins, postcards, lanyards, magazines, books, etc). I took a photo at the Falling Skies and Alien Isolation booths. I attempted to hit NBC's Community panel in Ballroom 20 but ended up at MTV's Teen Wolf panel. Though not a huge fan, the panel of stars (including the Maze Runner's Dylan O'brien) was pretty entertaining. One young fan girl was so overwhelmed in asking her question, Dylan O'brien was kind enough to give her a hug. The audience, "awwed."

Later, as a promotion, Subway gave away free subs. Since I was hungry, I couldn't pass up a free subway. Thanks Subway! Then, I headed off to Nerd HQ at Petco Park to chill out and people watch. Lincoln Park was setting up to perform and MTV's fanfest event went on. At Nerd HQ, actors Adam Baldwin and Zachary Levi took pictures with fans at the Nerd HQ photo booth. For 20 dollars, you get a meet and greet and photo, and proceeds go to Conversations for a Cause. I got a photo op with Zach Levi. He was pretty cool. Then the party at Nerd Hq began and it was poppin!

Friday ended up becoming an amazing day at the convention center! Instead of participating in a raffle/drawing for the Walking Dead or Game of Thrones autograph signings, I opted to do the first come/first serve autograph signing of my current favorite animated series, Nickelodeon's The Legend of Korra. It was exciting! I got in line for the exhibit floor and as soon as as the doors opened, I booked it to the Nickelodeon booth! I got lucky and ended up with a ticket to meet and greet with the creators and voice actors from the show. It was like winning the golden ticket! Also, I ended up with a pass and lanyard to an exclusive Korra party for Saturday! Since the signing wasn't until 1:15, I roamed the exhibit hall, took a break for lunch, put my loot back in the car, and chilled at the convention center. It was a little past 1 pm, and I decided to head for the Korra signing. The line was long (and keep in mind that the signing would only be for two hours). I was afraid that although I had a ticket, there would not be enough time for me to get through and get my signings. Lo and behold, I met the creators and actors; Bryan Konietzko, Mike Dimartino, Janet Varney, David Faustino, Mindy Sterling, Dee Bradley Baker and John Michael Higgins. They couldn't be kinder to the fans. They took the time to say hello and chat with me, all without feeling rushed. They took pictures with me and signed an exclusive Korra poster. It was amazing!

Next, I ended up meeting Nickelodeon's current Power Rangers. I'm not a huge fan but I thought, "why not?" I attempted to make the panel for BBC America's Orphan Black but was unable to do so. However, I got into the making of X-men: Days of Future Past panel. The writer for the movie discussed his experience making the successful film franchise. Back at Ballroom 20 was the screening of the latest DC animated Batman movie.

Saturday was an outside-the-convention-center kind of day. I got there later in the morning and headed to the Hard Rock Hotel to visit the Cape/Cowl/Create event, an exhibit celebrating 75 years of Batman. Here, the infamous cape and cowl were used as canvases for different artists and their masterpieces. And for signing up with WB games online, I got a free limited edition Batman lithogram! I then went to the Nerdist Industries event, right above Nerd HQ at Petco Park. There, they had the Borderlands Lazertag. Culture Shock Sd performed with some cosplayers which was pretty fun and amusing to watch. I headed over to the Marriot Hotel where they had the Nintendo Gaming Center.

Then I made my way over to Stingaree Nightclub where the exclusive Legend of Korra party would be held. They had free food and drinks, with an Asian fusion theme. The Korra video game was being promoted so there were opportunities to demo it on various game consoles. Some of the cast including Janet Varney and David Faustino were there. The producer and director of the game, Atshushi Kurooka and Eiro Shirahama and series creator Bryan Konietzko even signed my book! I met IGN's Naomi Kyle and she signed an exclusive Korra poster for me! I invited my brother and friends to the event as well. Attending this Korra theme party was incredible, there was nothing like it! I was thoroughly impressed with the promoters' efforts in showcasing the Legend of Korra and the video game. 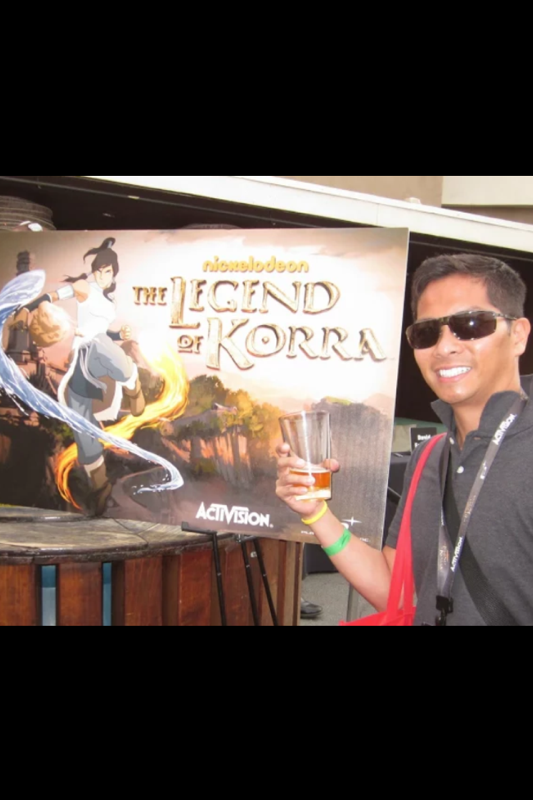 Sunday was a light day. However, for the first time ever, I zip lined at the Gotham booth outside the convention center! I must admit that it was pretty fun. I got a photo, a Gotham shirt, and GCPD badge. I went over to the batman cowl museum again and picked up a new limited edition Batman lithogram.

In conclusion, this year's Comic-Con was another series of fun-filled events. It was a pleasure meeting other fans in which I have similar interests with. And though the crowds can be difficult to navigate and be overwhelming, the memories of the positivity and experience itself will definitely last a lifetime. I can't wait until next year!

What were your highlights of this year's San Diego Comic-Con?
Guest Post by A. Michael Cruz