On the 13th Day of Christmas, University of the Philippines Concert Chorus Sings to Me

on December 13, 2013
A few years back, I was amazed by the beautiful voices of the University of the Philippines Concert Chorus in a concert they had here in San Diego. They sang a few Filipino folk songs, as well as well-known international love songs, which reminded me of the music my grandfather used to listen to as I was growing up. The voices were perfect and the traditional Filipino costumes were beautiful!

The UP Concert Chorus, UPCC, or simply Korus, is the official choir of the University of the Philippines. As an internationally-competitive performing group, Korus has perfected versatility in singing classical, folk, pop and Broadway musical genres with signature vibrant choreography. Korus is Ranked No. 1 in the world for Folk choral performance at the 2012 Festival Internacional de Cantonigros in Spain and the recipient of the 2012 Aliw Awards Foundation's Lifetime Achievement Award. Korus soars beyond its 50th year to share its unique, fun and passionate performance to the world.

I'm delighted to share with you a series of upcoming UP Concert Chorus concerts sponsored by local Filipino cultural organizations including the Council for Teaching Filipino Language and Culture and the Council of Filipino-American Organizations of San Diego County, along with the University of the Philippines Alumni Association.

I invite you to experience night of beautiful music presented by the University of the Philippines Concert Chorus: S'ALIW HIMIG, Isang Lakbay Taglamig 2014. See the flyers below highlighting several of the concerts in San Diego during the month of January 2014. 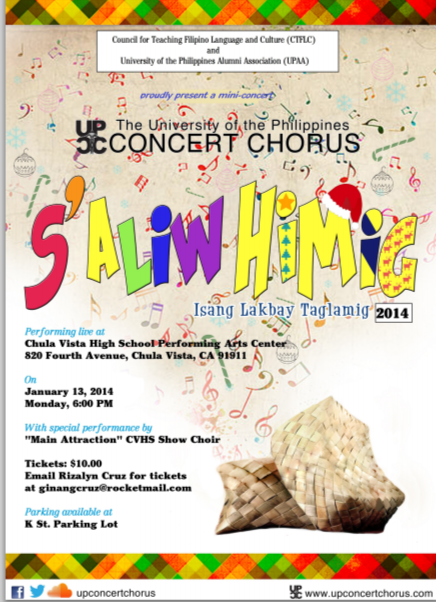 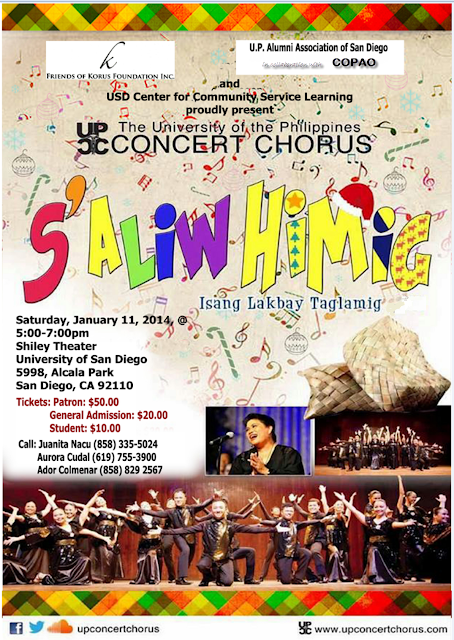 I have two tickets to giveaway for the January 13 UP Concert Chorus performance at the
Chula Vista High School Performing Arts Center!
Winners will be notified the week of January 6, 2014! Good luck!