Hold the Door Open or Not?

on October 26, 2013
More and more often, I've found myself getting angry after holding doors open for people in public places. It can happen at McDonald's or Roppongi, Ross or Macy's, with old people or young people, white, black, orange, or purple people. It seems like too many have forgotten the manners of holding doors open for other people.

For instance, just today, as I was walking out of Party City, I held the door open for my two boys who were following behind me as we were leaving, and two strangers walked right into the store after my kids walked out while I was still opening the door. No "thank you", no "excuse me", or nod the the head or eye contact as an acknowledgement for me opening the door for them.

Right after that, our family went to have lunch and as we were leaving the restaurant, the same scenario: I held the door open for my two boys who were following behind me, and two strangers walked right into the restaurant after my kids walked out while I was still opening the door, again without any acknowledgement of my holding the door open. 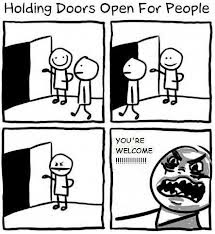 I was talking to my husband in the car about this and I asked him, "Am I wrong or isn't it common courtesy to hold a door open for people? To say 'thank you' when someone holds a door open for you?". He too had the same experiences and I have had, but it didn't bug him as much as it was bugging me at the time.

As I do all too often, I turned to Google for some answers. Here is some of what I found.

In the Ettiquette of Door Holding, the rules are:
If somebody holds a door open for you, you are required to perform an awkward half-run or fast-shuffle to get to the door as quickly as possible. This effort on your part is required to express appreciation for the person holding the door for you. The maximum Door Holding Length is 10 feet. This means that [you] should hold the door for any [person] within 10 feet. 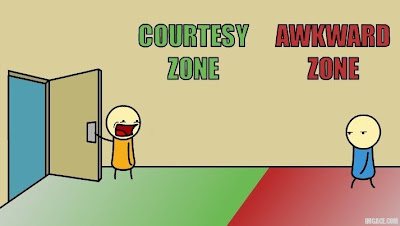 Madeline Kunin recently wrote in the Huffington Post,
Holding the door for someone is about manners, it's about time and it's about face-to-face interactions, even when the backward glance is in profile. The exchange is often between strangers who may or may not ever see each other again. It takes a few seconds to hold the door; some are heavy and require effort. But it's not just about the door. It's about making a split-second decision whether to connect with another person -- to acknowledge their existence.

Madeline Kunin perfectly phrased how I'm feeling about the whole "holding the door" issue I'm having. It is about manners. It is about being nice. Ultimately, it is about acknowledging someone who was kind enough to open a door for you and "acknowledge" your "existence".

I'm still going to open doors and try to not get angry about it when I don't get a "thank you". It's good karma! What are your opinions and experiences when holding doors open for others or having doors opened for you?