on October 08, 2013
Garcia Family just got back from a week long vacation in Boston! We did so much while we were there! So much so we "need a vacation from our vacation"!

I love sharing our family vacations with all of you in hopes you too will visit the fun places we've been too!

Since we did so much in Boston, I'll be posting each day of our vacation separately so check back each day for my latest post on our vacation fun!

On day five we went on another road trip, this time south of Boston to Plymouth, Massachusetts. 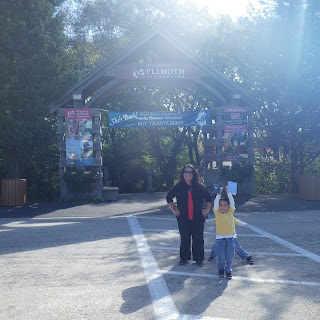 Our first stop was Plimouth Plantation where we traveled to the times of the Pilgrims and the native Americans in the 17th century. First we visited the Wampanoag homesite where we sat in one of their homes and listened to stories of life long ago. We saw a demonstration of how meals were prepared and how canoes were made of huge tree trunks. 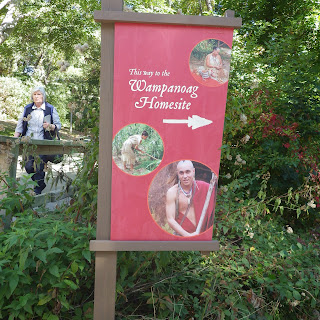 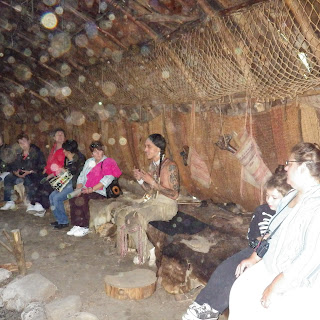 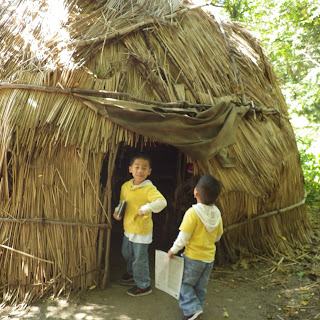 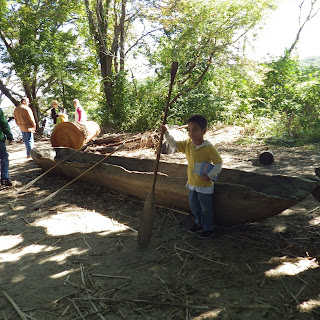 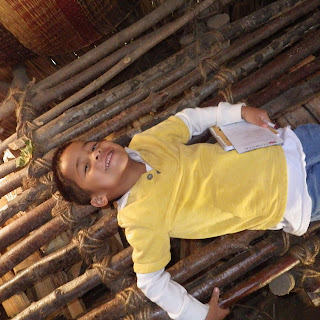 Second, we visited the English village which had about a dozen homes each with a inhabitant living their lives like the 17th century. We were able to visit with them in their homes and ask any questions we wanted. The boys asked about bathrooms and showers. Again, they were told about the "chamber pot" and washing with rags. The "pilgrims" shared that "submersing oneself" was a waste of water since it was so sparse. They also said they "dare not bathe in the ocean" since they believed it set an unbalance in ones mineral balance in the body causing sickness. The boys also asked if they had milk to drink. One of the English ladies responded, "oh we would never do that! Drinking the milk of a cow would cause one to take on the characteristics of a cow. Why would one want to be slow, dumb, and lazy like a cow?" The boys jaws dropped! I thought it was hilarious! 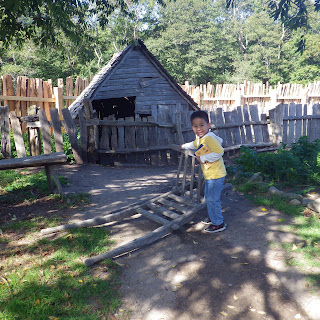 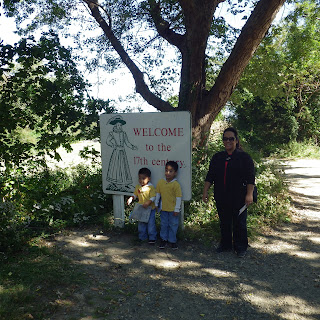 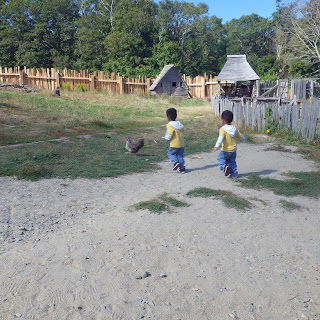 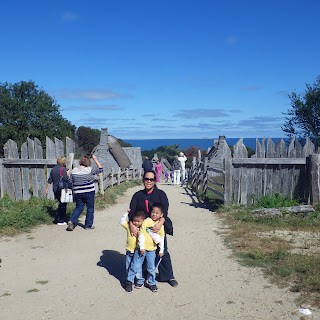 Exploring the homes, gardens, and surroundings of the English Village was fun! The best part was when the boys found a few chickens roaming around. They had a fun time chasing the chickens around. One of the pilgrims warned them to be careful since the chickens "attack". It didn't phase them! 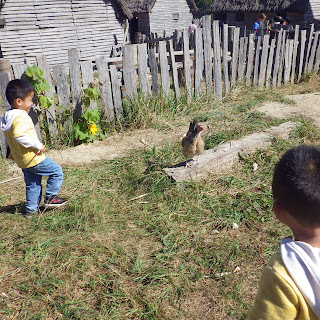 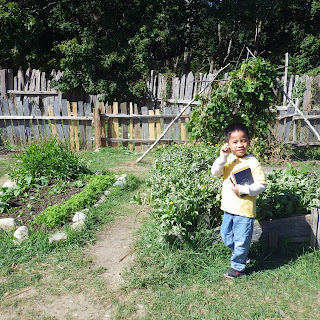 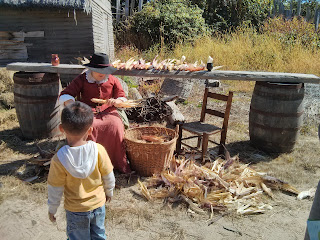 Lunch was at Carmen's Cafe Nicole where I had the biggest plate of a fried seafood mix with huge scallops, clams, shrimp, oysters, fish, and calamari! So yum!

Our next stop was Mayflower II, where we learned more about the voyage taken by 100+ Englishmen back in the 1600's. The Mayflower II is a replica of the original Mayflower. There were several tour guides and role-players on the ship to bring to life the experience of those who traveled on the Mayflower. 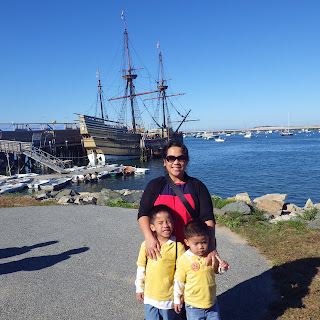 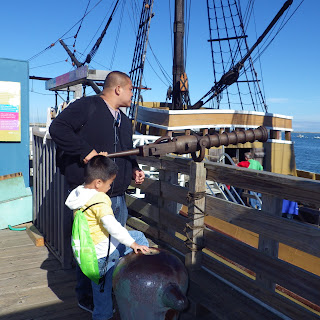 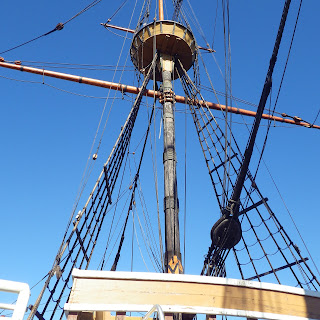 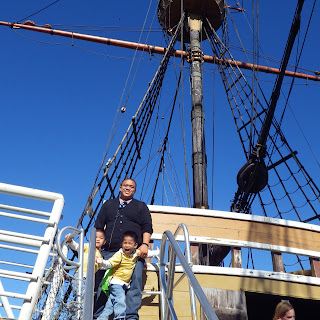 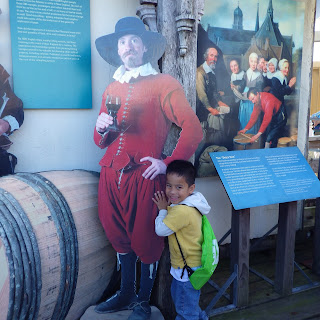 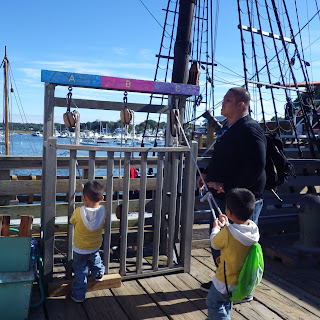 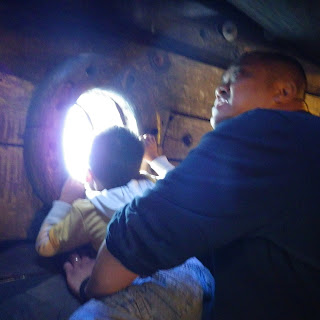 We didn't forget to stop at Plymouth Rock! 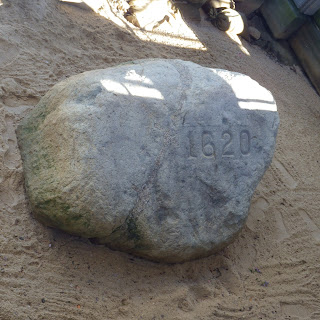 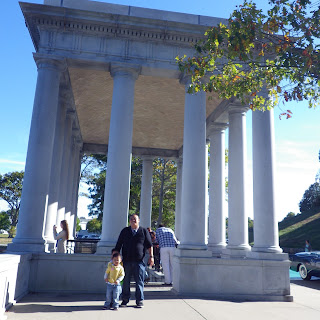 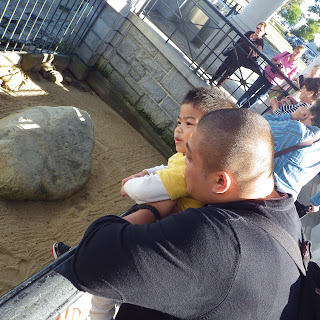 Dinner was at Tokyo Restaurant near our hotel at the South Shore Plaza Shopping Mall. Check out my review on Yelp. 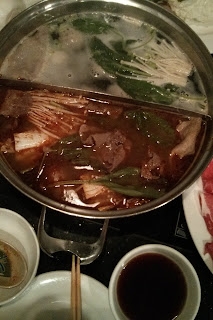 For all of our day five photos, check it out here!