The Comic Con 2013 Experience: A Recap

There were major surprises in this year's Comic Con than in previous years.  With those surprises, Comic Con 2013 will be another fantastic event to remember!

The main surprise was that the freebies were at an all-time low this year! In the past, the exhibit hall of the convention center used to be full of long lines of people waiting to get their pop culture themed swag including reusable bags, buttons, sharpies, mugs, pins, posters, post cards, etc.

The lines of hysterical grabby hands has caused major fire hazards during the conventions in the past, so to counteract this problem the networks have invested in the "Walk Through Experience," most of which were outside the convention center and free to the public. Rather than cater to only those who purchased attendee badges, companies like Summit Entertainment joined HGTV to promote their upcoming film with an exclusive Ender's Game fan experience. Visitors are given a tour of the set, pieces, and props of the film. Scenes and trailers of the movie are showcased in the walk through, and fans can Instagram, tweet, or Facebook their time here. In addition, I received a sticker and dog tag from Ender's Game which premieres November 1st. The brilliance of this inclusive experience allows fans to enjoy Comic Con without having to buy tickets.

Other film and tv industries followed suit. NBC promoted their upcoming series The Blacklist staring Emmy award winner James Spader. Legendary pictures showcased their next mega monster hit with the Godzilla Encounter and Disney had Disney Interactive. This was one of my favorite experiences as Disney allowed fans to play a demo version of their game called Infinity.  Hors d'oeuvres were served and artists can be observed sketching and drawing favorite Disney characters. Although the line to get in was long, it allowed the venue to be kept to a minimum which made for a serene and gallery-like environment. I enjoyed their swag as not only did I receive a reusable bag but a shirt that actually fits!

A lot of other events took place outside the convention center as well. Black Sails, a new series from Starz had a special screening at Reading Cinemas, a historic movie theater located in the heart of the Gaslamp. The producers and stars of the series came out to greet fans in the theatre. As a bonus, well-known musical composer Bear McCreary (Battlestar Galactica, The Walking Dead, Agents of SHIELD) serenaded the audience with a mini-concert of his work from the show.

DC Entertainment and Kia partnered together to show their line of superhero inspired vehicles. Also at this exhibit, there were art pieces, mini statues, and paintings of fan favorite heroes including the New 52 versions of Superman, Batman, Wonder Woman, Aquaman, Cyborg, Green Lantern, and the Flash. The event was interactive as you were able to scan the value of the gallery pieces by using your smartphone. Other outside exhibits included Cartoon Network's Regular Show, Mad Max, the Smurfs sequel, Adult Swim Funhouse, and Hello Kitty.

A staple of Comic Con were the long lines and wait time for the panels within the Convention Center (affectionately called "Line Con"). Lines extended as far as the eye can see and beyond, for Hall H and Ballroom 20 were jam packed full of die-hard fans waiting to see Hollywood's finest actors, directors, and producers. On Thursday, at the Indigo Ballroom located at the Hilton Bayview Hotel, I attended FX's Wilfred panel starring Elijah Wood, who appeared via satellite.

On Friday in Ballroom 20, I attended the Writers of the Big Bang Theory Panel (with surprise appearances from actors Johnny Galecki and Melissa Rauch), Nickelodeon's Legend of Korra, Fox series Bones with stars Emily Deschanel and David Boreanaz, and Marvel's Agents of SHIELD starring Clark Gregg, Ming-Na Wen, and produced by my all-time favorite writer/director Joss Whedon! They showed the pilot episode and it got me hooked! Shield premieres on September 24th on ABC.

Later in the evening, I attended the Veronica Mars offsite event at Regal Cinemas in Horton Plaza. The cancelled series is now being turned into a feature film via the Kickstarter Campaign. Fans of the show made donations in excess of two million dollars to make this movie a reality which is a first in television/movie history! Stars of the 2014 movie including Kristen Bell and Enrico Colantoni were there. I got a photo op with actor Percy Daggs who plays Wallace Fennel!

On Saturday, I  attended a Marvel Gaming Entertainment Panel where different games (video and board) were discussed. Not only was there a surprise appearance from Stan Lee himself but an impromptu wedding proposal by one of the panelists to his now fiancé. The audience cheered with excitement!

Later that day, I got to see the panel for HBO's True Blood in Ballroom 20. The stars including Anna Paquin and Joe Manganiello and producers talked about the direction of the series. Here, tickets were handed out for the coveted "fulfillment room" located at the Marriot Marquis and Marina Hotel adjacent to the convention center. With this exclusive ticket to the "fulfillment room," I received HBO's swag including a cinch bag, sunglasses, journal, T-shirt, and xbox live gold membership, all with True Blood as a theme among these exclusive and promotional items.

Hall H houses the largest room at the convention center allowing for more than 6,000 attendees at one time. So on Sunday I was able to attend the CW's Supernatural  panel staring Jensen Ackles and Jared Padalecki. But what was most exciting of all, was the next panel featuring the creator and cast of AMC's Breaking Bad! Actor Bryan Cranston came out wearing a life-like mask of his character, Walter White. It was marvelous to see these fine actors discuss their work as their series comes to an end later this summer! Breaking Bad's latest season premieres on August 11th on AMC. Cult favorite Dr. Who made an appearance and the stars discussed 50 years of this long running series. Members of the audience flashed their sonic screwdrivers in unison! Though not an avid fan of Dr. Who myself, I might just have to check it out on BBC America (see local listings for time and details).

Overall, I highly enjoyed my four back-to-back days at Comic Con 2013! I was able to visit the exhibit hall, snag some swag, meet and interact with some fellow fans, visit with old friends, take pictures of people in Cosplay, and see celebrities here and there! With so much to do, there were other events I wasn't able to attend including the Masquerade Ball, the Walking Dead Escape, and the Eisner Awards. And for fans who didn't get tickets to Comic Con, they were able to experience the events surrounding the Gaslamp area. Knowing that there's so much to look forward to and do inside and outside the convention center, I can't wait for next year!

What was your favorite aspect of this year's convention? Will you be attending San Diego Comic Con in 2014? 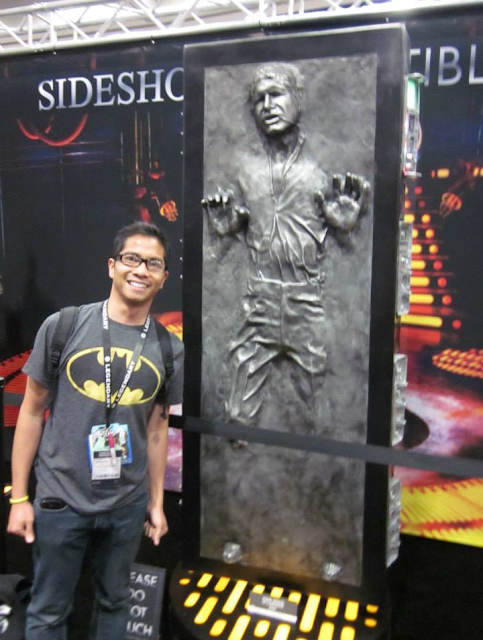