on July 21, 2013
Each year, the International Comic Con comes to my hometown of San Diego. On the news and online, the entire world sees numerous celebrities at Comic Con promoting their latest projects.

Each year I've dreamed of meeting the casts of HBO's True Blood. I've tried to figure out where they were making appearances or where the "True Blood Party" would take place in San Diego. Each year it was a big fail.

This year for Comic Con, my hubby and I decided to walk around the outside area of Comic Con to check out the festivities. In the back of my mind I was thinking, "Wow, it would be great the meet the True Blood cast this year..." With no specific plan, my hubby and I walked around, scored a few freebies and enjoyed some of the events including Disney Infinity Interactive, the Fandango Lobby, and CNET Base Station.

As we were walking around the displays along the bay, I noticed a huge yacht with a "TV Guide" banner hanging on the side. There a few Comic Con attendees outside the gate adjacent to the yacht. I asked them i they said seen any celebrities and one person said, "The True Blood cast is in there..." I almost fell over when I heard those words! I asked hubby if we could wait a bit and, being a great husband he it, he agreed. 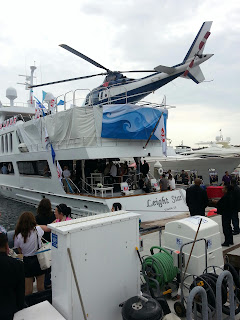 After about 20 minutes, I was losing hope and told myself I'd wait 5 more minutes for the cast to come out of the yacht party. Just as I was getting ready to leave, the True Blood cast emerged from the party, leaving the yacht. My husband who has better eye sight that I quickly identified the cast. 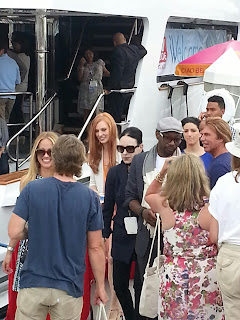 I quickly ran over to where the heavily tinted SUVs were waiting to pick up the actors. There were lots of security protecting the actors from the crowd that was quickly growing. I pushed my way to the front of the crowd in hopes to snag a picture with at least one of the actors.

Rutina Wesley, who plays Tara on True Blood, was the first one to come through the crowd. She passed very quickly, signing a few autographs and not stopping for any photos. I was discouraged thinking the entire cast was going to bypass pictures. Here's the back of my head with Rutina in the cool looking shades.

Next through was Deborah Ann Woll who plays the role of Jessica on True Blood. She is beautiful in person as she is on TV. Flawless, tall, and very pretty! Very Hollywood! She did not stop of autographs or photos.

Sam Tramwell, Sam Merlotte of True Blood, was the first to stop for a picture. I was so super happy!

Robert Kazinsky, Warlow on True Blood, also stopped for photos and autographs.
The rest of the True Blood cast stopped for pictures. They were all so nice!

Last, but not least, was a most favorite of all the True Blood cast, Joe Mangianello! Joe plays Alcide Herveaux, the Wolf Pack Master. I was shaking with excitement when I met him and screamed with delight after I had taken my picture with him! My hand rested on his back and I felt his buffness, SQUEAL!!!!!! 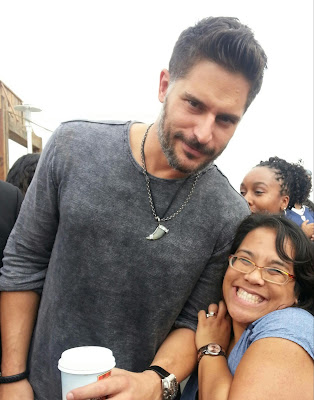