A few weeks ago, my husband told me about the Tech Tots classes offered at our local Microsoft Store. I was super excited to take our boys since they love technology! I've caught my five-year-old watching Windows 8 tutorial videos and advertisements on YouTube so I knew he'd be excited to go to Tech Tots.

On the Microsoft website, Tech Tots is described as "hands-on, interactive playground where children ages 2-5 will learn by doing — and parents can learn tech tips and discover the latest in technology." The description was perfect to meet my sons' interest in technology!

So early a Wednesday morning, we headed to the Microsoft store about 30 minutes before to ensure we had a spot in the "class". Tech Tots started 30 minutes before the store opening to the public. The children were welcomed into the store for "free play" for the first 10 minutes. My five year old ran to the first tablet he could get his hands on and started swiping the home screen for a game or app to explore. A few of the other toddlers did the same. There was no guidance by any of the Microsoft staff as to which app to use, which were kid friendly or educational. So, my five-year-old, on his own, found a drawing app he played with. My 2-year-old found a spot in the corner of the store where a play  area was set with a play mat and blocks for the younger children to play. 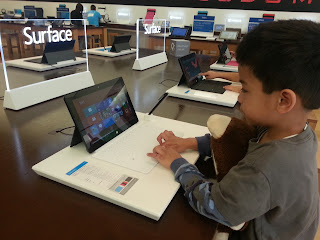 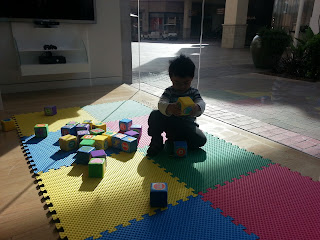 After about 10-15 minutes, the children were called to the play mat, given name tags, and were given an explanation of the activity for the morning. The children were told they were going on a treasure hunt around the store. With a tablet, the Microsoft employee showed the children a short animated video of "Tech Mouse" who was going to lead them on the scavenger hunt. A dozen kids huddled around a tablet with barely audible sound was discouraging when there was a big screen TV right behind the Microsoft employee showing the children the tablet. 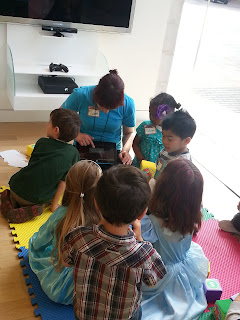 The children were then each given a Microsoft shopping bag and the treasure hunt began. The Microsoft employee showed the children a picture of the first treasure to be found in the store. The picture was on her smartphone. Again, a dozen kids huddled around a small smartphone, when the store was filled with tablets and TVs, didn't make sense. 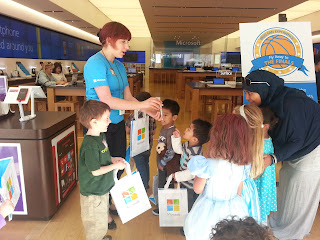 The first clue was an X-Box Angry Birds game. The children went running to find the game. They were instructed to each put the game in their bag. One child asked, "Do we get to keep it?!". The employee then replied, "No, you're going to have to give it back at the end of the treasure hunt." A few of the kids sighed, others responded with an "Aww....". 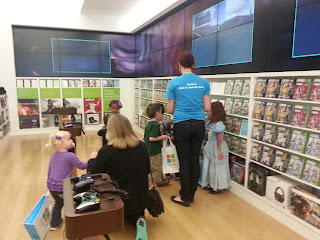 The next treasure was Bluetooth headphones. Again, the kids ran around the store, looking for the headphones. Once found, they placed the items in their bags. 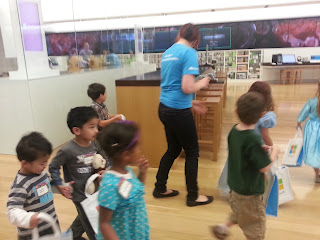 The third and final clue was a flyer for a $99 class offered at the Microsoft store to learn how to use their products. The kids were each given a flyer and placed it in their bags. 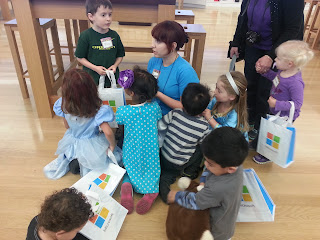 All the children were then instructed to go back to the play mat. "We are now going to look at our treasures!" the employee said. "First take this out..." pulling out the Angry Birds game. The employee then asked, "Do you all know what this is? What do you do with it? Do you all have an X-Box at home?" At this point, I was getting a bit upset. This "Tech Tots" was not teaching my child on how to use technology, but more of now to buy Microsoft products! 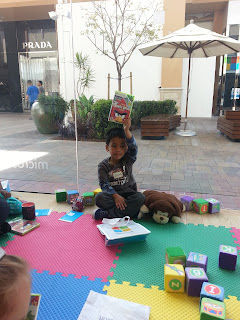 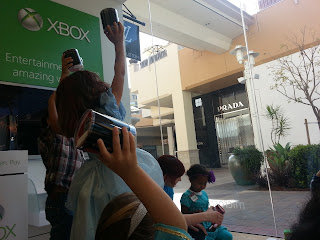 Lastly the flyer. The children pulled the flyer out of their bags and the employee said "This is a flyer for a class offered here in our store. It's for your parents to learn more about how to use their Microsoft products". 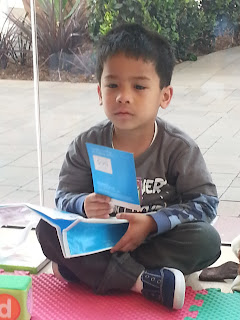 Then, the children were instructed "Ok, kids. Now give me all the items back." As the employee gathered all of the X-Box games, Bluetooth headphones, flyers, and Microsoft bags.

"Now you can have some more free times on the computers. Have fun! No running OK?" said the Microsoft employee. Again, no direction on educational apps and programs to use.

After about 10 minutes, the kids were brought back to the play mat and given snacks: a juice box and a small package of goldfish crackers with a huge Microsoft sticker on the side! Now, call me crazy but, isn't giving kids juice and snacks in an electronics store a BAD IDEA?! After the snacks, the kids and parents were thanked for coming and they hoped to see us next week. I didn't expect my kids to be given snacks, that's NOT what we were there for. 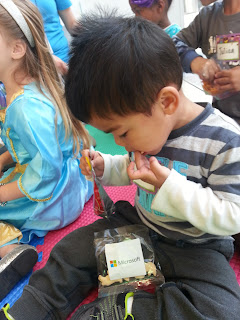 I will NOT be coming back to a Tech Tots "class" at the Microsoft Store. My sons learned nothing about technology, except for Microsoft products that they DO NOT NEED and are NOT EDUCATIONAL. If Microsoft's purpose of "Tech Tots" is marketing, they failed. Does Microsoft not have apps or software worthy to share in a venue like "Tech Tots"? Show me how your products can engage my child in learning their alphabet, numbers, and/or reading, not X-Box ANGRY BIRDS!