on February 12, 2013
Since he was a few months old, my son has always been a fan of electronics! When he was 18 months, we had gone on a cruise for a family vacation and my son came to be known as the "iPod baby" by other vacationers we were on the cruise with.

He is a few weeks away from his five year old birthday and he knows how to navigate an iPod, iPhone, iPad, Android smartphones, and Nexus7 tablets. Thanks to these technologies, my son quickly learned his shapes, colors, letters, numbers, and has picked up the ability to read easily. Daddy Garcia works in the computer industry so we have all kinds of electronics around the house. This my son has come to be familiar with all of the computer devices. He's been begging for a Windows phone for this birthday. He quotes the Windows 8 ads about it being the "fastest", "newest", and "greatest" smartphone out there. There is no way he's getting a phone, but I have to admit he does know lots about it!

If you follow him on twitter (@GarciaBrosSay), you'll notice some of his YouTube favorites include videos about Google apps, the latest cellphones, and other geeky computer stuff! 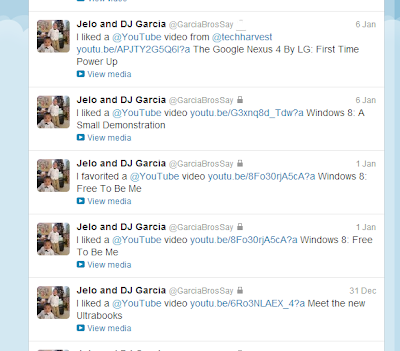 On a recent trip to Barnes and Noble, he saw a Windows 8 "for dummies" book and was begging me to buy it for him. I wasn't about to buy a $30 book he could barely read, so I convinced him to buy PC World Magazine instead. He was happy with the compromise! 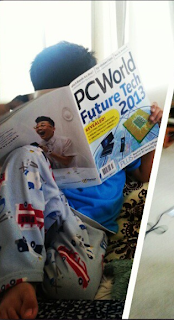 So, a few days ago, I get a text message from one of my cousins. She sent me this screenshot of a message she received from one of her friends on Google+: 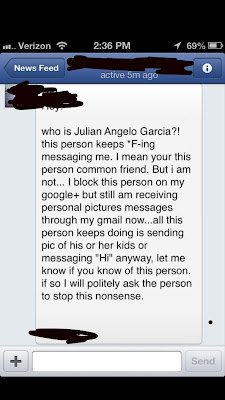 Yes, my son has a gmail account. He knows how to send messages to his grandparents and aunts on his contact list. He knows how to reply to emails, put messages in the trash, and etc. He's so savvy with Google apps that he activated a Google+ account for himself. Months ago I noticed but I put all the privacy settings on so he could only interact with people in his "circles" which I pre-approved (cousins, aunts, uncles, grandparents). He posts pictures of himself making funny faces and videos of him being silly. He'll chat with his cousins with an occasional "Hi" and "Hello" because that's all he knows to type.  But I guess he's been able to message friends of friends. Thus the screen shot above. At first I laughed when I got the text message. It was funny this person was upset at a four year old's innocent "Hi" messages and pictures of his cute self! Then I felt bad that my son had violated someone's "virtual space".

Thus, my husband and I had to have a talk about internet responsibility with our four year old. Weird, I know! No chatting with strangers, asking for permission before sending an email, posing a picture/video, and more. I never thought I'd have this conversation with a four year old! We deactivated the Google+  and changed his password to Gmail so he needs us to log him in.

I want to be able to foster my son's love for technology but at the same time, limit what he can and can't do online. Parents, do you have tech savvy kids? How do you keep them internet safe?