So far this year, I've done:

For the month of October, Eleina and I took on the Southern California Rugged Maniac. When we took on this challenge for 2012, we knew we wanted to do a mud run. Rugged Maniac was the one we chose for October. When reading the description of the run on their website, the Rugged Manaic looked very challenging. It said most of the people who do this run are being who do "cross fit" and are "experienced obstacle course runners". I DO NOT do cross fit and I AM NOT an experienced runner. So, I knew from the get go this run would be very challenging. 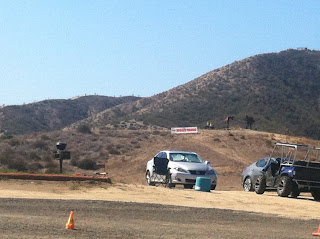 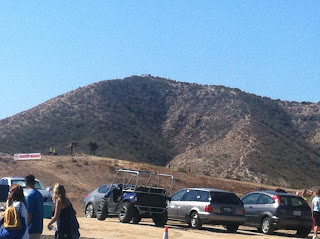 We approached the start and had to jump a wall to get to the start line. Short me had a hard time with this first obstacle. I dreaded the 18 obstacles to come ahead! 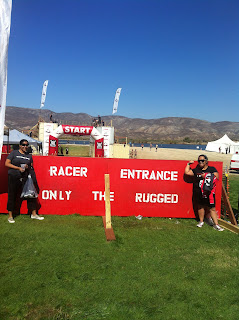 When the horn sounded for our 10:15AM start, the hardcore "real runners" ran past me, as usual. I jogged for about a quarter of a mile and then met the first obstacle: going through the lakeshore which was thick with mud at the bottom. I had to be fast or my feet would sink or I'd lose my shoes! Once out of the lake, my shoes were filled with mud and soot, making it hard to even walk. At this point, the running stopped and the walking began.

The next obstacle were a series of a mud hills to climb, about 6-8 feet tall. The hills had a mud pool in between them about 8 feet long and about 3 feet deep. Going up those hills and wading through the mud was exhausting, I was out of breath and I to stop moving for a bit. Next were some hanging tires and tires on the ground to maneuver through. Then, another set of hills and mud. 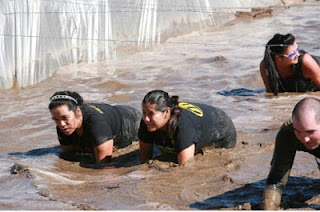 Then the mountain, the dang mountain, that at times was so steep I was ready to quit. At times the trail was so narrow, I was scared if I took the wrong step or slipped, I'd fall down into the valley. The whole time I was huffing and puffing up the mountain, the hardcore people were passing us by but they would give people like me words of encouragement "keep going girls!", "you got this girls!", "you're almost there!". It was motivating to hear those words. I wasn't being judged for being slow or having a hard time,  but encouraged to keep going. The "mile 1" sign was at one of the inclines. I thought to myself, "Ah shit, only?!".

Most of the run was up and round the mountain, the last mile or so was going down the mountain. At times, I learned why people use "trail" running shoes and not just plain "running" shoes on runs like this. The terrain at times can be slippery, even when dry. Steep inclines and declines can cause you to lose footing if you step wrong or have the wrong kind of shoes. The next two miles had tall walls to climb, tunnels to climb and slide down, barb wire to avoid, mud to climb up, slide down, wade through. It was disappointing to not see more support staff throughout the run that I've been accustomed to in the other runs I've done, considering this one was so grueling. Also, there was only one water station the entire run. I can understand one mid-route water stop in your usual 5k, but this was not my usual 5k. I was dying for water by the time I got to it.

Towards the end of the run was a giant water slide that ended up on a four foot pool of muddy water. I almost drowned trying to gain footing after I dropped from the slide. The guy next to me had to ask if I was OK. I barely caught my breath. I swam to the other end of the muddy pool to find a 15 foot wall of mud I had to climb to get out of the pool. Thank God there was a rope to pull myself out! 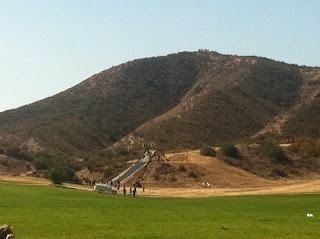 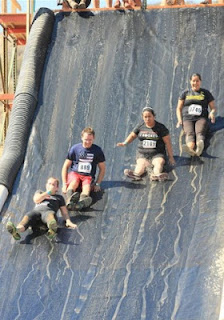 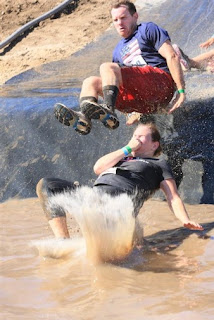 More hills, more mud pools, and more obstacles in the lake bed to end the last mile. With the finish line in sight, there was two lines of fire we had to jump over. I ran to get a running start to make sure I didn't burn myself, I can't jump that high! 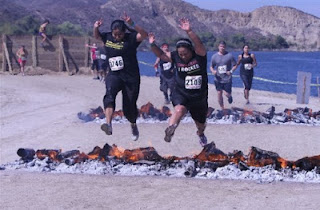 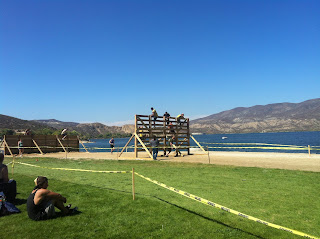 To get to the finish, there was a 15 foot tower to climb, cargo net to cross to another tower, then to climb down the tower to the finish line. At this point my legs were so tired, my arms weak. I was shaking in fear I'd lose my footing or handle to the planks I was grabbing on. Once at the bottom, Eleina and I did our "Gangnam Style" pose for the photogs as we finally crossed the finish line an hour and 1/2 later! 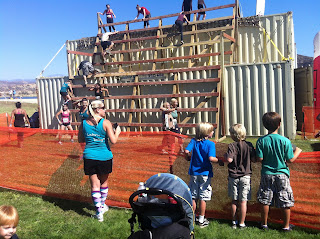 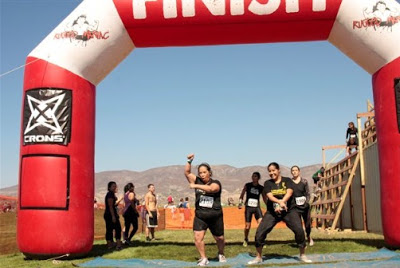 Out of all 10 runs this year so far, this was been, by far, the most challenging. The running/walking 5k is challenging enough for me. Adding the mountain and the obstacles took it to another level. The whole time I had the angel and the devil on my shoulders arguing to keep going or to stop. A few of the obstacles I skipped because I was just too tired and I feared landing wrong and hurting myself. I've learned in the runs I've done so far is that I have to learn to pace myself or I end up feeling sick at the end of my runs. I'm so proud of myself being able to do the "Rugged Maniac" and I can say "I AM A RUGGED MANIAC"! 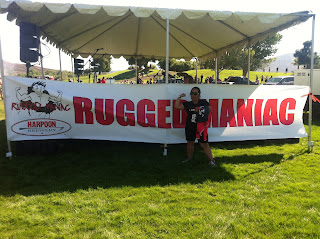 This rugged maniac went home and passed out on the couch for about three hours after the run! My body hurts in places I didn't know could hurt! The scrapes and bruises on my legs will heal soon enough!