on September 21, 2012
Today was the usual Friday afternoon freeway commute: boys in the backseat, KidsBop on the radio, and ideas bumping around into head of where to have dinner.

Until all of a sudden our car was hit from behind: bang, bang, bang! A series of bangs as our car was rammed from behind, then a long push as the car behind us accelerates while pushing our car making it uncontrollable. The car behind finally pulls off to the side, accelerating and ending up in the ice plant off the shoulder a few meters ahead of us as we also pull over.

I was shaking, nervous. I look at my rear view mirror to check on the boys but it was shaken out of place. I turn around and the boys eyes were as big as dinner plates. I ask if they are OK, they both reply "we're ok!" I call 911 and then wait for the police. A tow truck driver pulls over next to us. The tow truck driver comes over to check on us and tell me he saw the whole thing. He went to check on the driver who hit us and came back to say "he's not responding to me but he's conscious".

As we wait for the police to arrive, the car who hit us again tries to accelerate, tires turning, smoking, but the car doesn't move.

When the police arrive, they do a quick check on the boys and I. They then proceed to question the other driver for at least 20 minutes. The police comes back and explains the other driver had an epileptic seizure. He's not arrested, not taken into custody. The driver leaves in the tow truck along with his car.

My husband arrives and follows me as I drive back home.

Yes, my car was driveable. His car was not.

I thank God the boys and I were not hurt during the accident. But, was this accident avoidable? Should people who suffer seizures be allowed to drive?

CNN did a story of a family who died when hit by someone who had a seizure: http://transcripts.cnn.com/TRANSCRIPTS/1206/14/ng.01.html

Here at the recommendations for driving with epilepsy: http://www.epilepsy.com/EPILEPSY/rights_driving

This accident was one of the scariest experiences in my life, most especially because my boys were with me.

What are your opinions on driving with epilepsy?

Here is a picture of the man who hit us, next to his car, while we wait for the police. 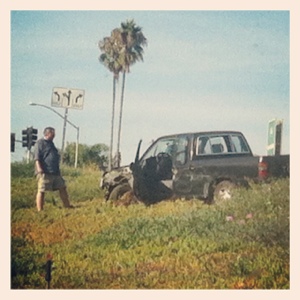