My Little Men and Yoga

on August 20, 2012
I love yoga. I don't get to do it as often as I'd like to. But when I do, I have such a rewarding and accomplished feeling in end. Savasana, relaxation pose, gets me in such a relaxed state that I've caught myself snore a few times at the end of some of my yoga sessions!

Today, thanks to Next Generation Yoga and JW Tumbles, my little men and I got a chance to try yoga together. My boys haven't tried yoga before so I was anxious to have this experience with them. When we arrived, we were greeted by Jill from JW Tumbles. She got us settled and introduced us to Puja, our yoga instructor for the day. We were the first one's there so Puja and Jelo, my 4 year old, engaged in my son's favorite topic, computers. He talked her ear off about Google, Gmail, Android, and Apple. His usual topics of discussion! All the while my 2-year old was running around and rolling on and around his yoga mat.

The class was small, about 10 kids total, ranging in age from 2 to 4. Bright orange yoga mats were arranged in a circle which allowed us to sit facing everyone in our class. The yoga session started with an introduction song and each child introducing themselves. The theme of the yoga for today was transportation. All the moves we did simulated all kinds of transportation: bike, car, train, airplane, and even walking! We did some seated twists, downward dog, warrior, back bends, and core moves. Jelo followed along well. He seemed to enjoy the activity very much. He was attentive and tried to do most the moves. He did get caught up in watching the others do the moves also. DJ did most of his moves standing, jumping, and waving his arms around. I guess its the "two year old yoga". My boys "tooted" once each during their first time at yoga. The mom next to us giggled a bit. Everyone toots when doing yoga, right?

The end of the class ended with the usual savasana. Each child was given a lavender eye pillow to put over their eyes while the laid on their back and relaxed. The mom's were given a lotion to massage their child's feet while they relaxed. Since Jelo was relaxing, I massaged his feet. He sat still with the pillow on his eyes. I was surprised he enjoyed it as much as he did. DJ was walking around, watching the other relax, he cared less for the foot massage. The savasana ended with the mom's lying next to their child, and their child was asked to whisper something special to their mom, and vice versa. We were also prompted to think about others in our lives we wanted to send good vibes too. We thought of Daddy stuck at work. We all then sat up and ended our yoga with the traditional "namaste".

On our drive home, I asked the boys if they liked yoga. Jelo said, "Yes mom. I almost fell asleep in the end. I want a pillow like that!". At home, Jelo showed off his airplane yoga moves to Daddy. Daddy was super impressed!

I loved the experience with Next Generation Yoga and JW Tumbles. We can't wait to try it again! 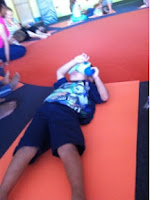 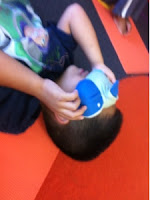